KOí¿N, ROB ZOMBIE, DEVILDRIVER, AT THE SKYLINES, THE DEVIL WEARS PRADA AND MANY MORE MUSICIANS TALK ABOUT HOW SLIPKNOT INFLUENCED THEM ON ARTIST DIRECT!

With the release of SLIPKNOT’s ‘Antennas To Hell’, we’ve gone a bit nostalgic and have been posting our favourite memories […]

ARTISTdirect.com caught up with ROB ZOMBIE recently to talk about The Lords of Salem, creating characters, writing and recording new […]

ROB ZOMBIE GUITARIST JOHN 5 TALKS TO MUSICRADAR ABOUT HIS NEW ALBUM, THE STATE OF THE MUSIC INDUSTRY AND GEAR…

John 5 has worked with everyone from k.d. lang to Ricky Martin to Lynyrd Skynrd – and we all know […]

REVOKER are currently on the road (what’s new!) and somewhere in between playing across the UK, they found time to […] 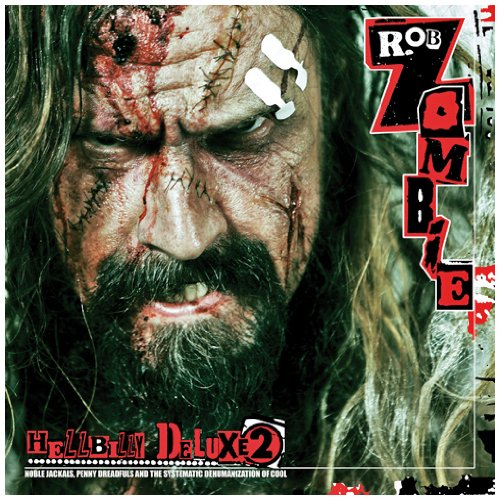 A music artist and auteur filmmaker with shrewd insight and unlimited vision, Rob Zombie has continuously challenged audiences as he stretches the boundaries of film, music and publishing. He’s not happy merely sporting a single creative hat; instead, he submerges himself fully in each artistic endeavor, rolling up his sleeves and immersing his hands completely in each project. That’s the long and short of the artist known as Rob Zombie.

But perhaps the arena in which Rob Zombie is best known and most celebrated for is his music. He is a 7 time Grammy-nominated recording artist, having sold over fifteen million albums worldwide to date. Late 2009 brings Zombie to a new home at Loud&Proud/Roadrunner Records, with a new album, the long awaited Hellbilly Deluxe 2, due out February 1, 2010.

The demons were let loose on Hellbilly Deluxe 2, which comes a dozen years after its predecessor, Hellbilly Deluxe, the album that established Zombie as a solo artist in his own right following the demise of White Zombie. That album also yielded a string of successful radio singles, namely “Dragula” and “Living Dead Girl,” both of which dominated the airwaves in 1998 and 1999, closing out the decade, Zombie style.

Well, it’s a new decade (and a new millennium, not to mention) and Hellbilly Deluxe 2 picks up where its predecessor left off. Even though there were two studio albums -2001’s The Sinister Urge and 2006’s Educated Horses—in between the Hellbilly bookends, only an artist of Zombie’s caliber, however, can make the jump so seamlessly with Hellbilly Deluxe 2, which features the infectious single, “Sick Bubblegum,” which sounds like it was written during the original’s sessions, but remains modern, relevant and forward-thinking. “What?” is a catchy, distorted track that screams of signature Zombie, the one his throng of fans knows and loves. “Werewolf, Baby!” is another sick ‘n twisted rock ‘n roll anthem, while other electric romps like “Jesus Frankenstein” and the thunderous “Mars Needs Women” are vintage Zombie featuring ass-moving grooves piled on a storm of chunky riffs. Hellbilly Deluxe 2 is Rob Zombie in 2010: leaner and meaner, with the same snarl and appreciation for all things dark and a little bit dastardly. It’s no easy feat to record a companion-style follow-up 10 years later, but Rob Zombie makes it look and sound easy.

“This was one of the least stressful records I’ve ever made. The songs fell together in record time. ” says Zombie, “For some reason the best songs always come easy.”

Not content to merely arrest the world with his delightfully nefarious tunes, Rob Zombie directed the second edition of the Halloween franchise, Halloween 2 for Dimension Films, which came out in August 2009. It was his fifth time writing and directing a feature film. Zombie had also interpreted John Carpenter’s original cult horror film Halloween in 2007; that film premiered at number one at the box office, breaking all Labor Day Weekend 2007 records and grossing an estimated 80 million dollars worldwide. His efforts on rebooting and reinventing this beloved franchise earned him two nominations from Spike TV’s Scream Awards, for Best Director and Best Remake; he picked up the award for the latter. His previous films include 2004’s House of 1000 Corpses and 2005’s critically acclaimed The Devil’s Rejects also a Spike Award winner. Zombie wrapped production on his animated, R-rated feature, The Haunted World of El Superbeasto, which is now available on DVD.

For the past two decades Zombie has directed dozens of videos, having lensed tracks for fellow metal superstar Ozzy Osbourne, among others. He contributes material to soundtracks and isn’t afraid to push boundaries and ignore the parameters when it comes to the both the audio and visual mediums. He won the 1995 MTV Music Video Award for White Zombie’s ‘More Human Than Human,’ making history by becoming the first self-directed artist to pick up the award.

In fall 2009, Zombie kicked off the ‘Hellbilly Deluxe 2 Tour,” where he was accompanied by his longtime bandmates: guitarist John 5, bassist Piggy D and drummer Tommy Clufetos. “I am bouncing off the walls like a mental patient,” Zombie said about the tour. “That tells me it’s time to take it to the stage and let the demons loose.” Zombie will continue to tour following the album’s release.

When it comes to any artistic feat or endeavor, leave it to Rob Zombie to accomplish what appears on paper to be nearly impossible. Armed with Hellbilly Deluxe 2, this artist is once again about to swoop down and capture the hearts of hard rockers the world over.