Opeth frontman Mikael Akefeldt has spoken to MusicRadar about his 9 top tips for guitarists; “For me as a guitar player, […]

OPETH AT THE PROG AWARDS!

Huge congratulations to Opeth who won ‘Band Of The Year’ at the Prog Awards last night! Opeth return to the […]

Check out this killer footage of Opeth performing ‘Deliverance’ at Wacken Open Air 2015.

Opeth have been nominated for ‘Best Band’ and ‘Best Album’ for ‘Pale Communion’ at this years Prog Magazine Awards. Click here […]

Opeth’s Fredrik Akesson officially shreds! Check out the trailer for Axemen Of Sweden below. Opeth’s latest album ‘Pale Communion’ is out […] 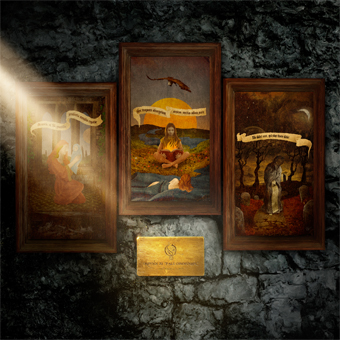 Opeth has spent over two decades steadily amassing a body of work that is at once possessed of a fervent and unrelenting devotion to aesthetic progression (and perfection) while simultaneously scaling the summits of power, mysticism and might aspired to by the group’s hard rock forefathers in Sabbath, Purple and Zeppelin.

The band’s roots in the doom-laden shade of occult-infused Scandinavian death metal and dark romanticism are undeniable and will never elicit apology. But the transcendent emotional and melodic heights achieved on the brilliantly titled tenth full-length Opeth album, Heritage, marks a new chapter in the storied quintet’s career. Band leader, singer, guitarist, songwriter and long-running consistent member Mikael Åkerfeldt has reshaped the pathway forward for his artistic vehicle without sacrificing the hard won spiritualism of previous endeavors.

“I’ve become synonymous with Opeth,” he says, acknowledging his dedication to perfectionism and his studied decision making regarding the group’s methodical and deliberate shifts. “I’ve been writing the material since the first album. I’ve been steering the ship for many years now and I’m quite comfortable. It’s something that I created and the people that have been in Opeth with me have helped make this into a very special band.”

The latest masterwork from the Stockholm, Sweden based virtuoso musicians is a mind-boggling dense maze of tempo shifts, off-time signatures, percussive experimentation and warped rhythms. It is all expertly melded together by a myriad range of emotional outpouring and breezy melodic optimism which soars above the songs like a woodland spirit surveying its forest. There are multiple hints of darkness but Heritage moves the band forward into broader dimensions.

“This album is not really an ‘extreme metal’ type of record, I suppose, but it is ‘extreme’ in a different way,” Åkerfeldt offers. “It’s intense in a different way. It felt right for us to do a record like this right now. Most of the people who have been with us for a while are getting into this album. They seem to like it as much as we do.”

An Opeth album is created to be experienced as a continuous whole. In this age of downloading, singles and increasingly put-upon attention spans, preternaturally listenable Opeth albums like Still Life, Blackwater Park, Ghost Reveries and Heritage stand like shining beacons amongst an ocean of disposable short-term placebos.

“It’s a slightly old school idea but when we put out a record there are no ‘key songs.’ It’s the album that matters,” states Opeth’s frontman. “We’ll never have a ‘hit single.’ By no means would I want one song to be more important than another. We always put out an album and I personally enjoy listening to entire records. That is the kind of art that I like. I like bands with strong albums as opposed to just a couple of strong songs.”

Opeth in its latest musical incarnation is as meticulous, focused and impassioned as ever. Yet those elements are presented with a newfound openness, spirited generosity of feeling and long visits to the astral plane. Heritage somehow pulls off the impossible task of doing more with less and less with more at the same time. There’s plenty of room to breathe on the surface but peek inside and you’ll be met with heady complication.

Åkerfeldt returned to Porcupine Tree mastermind Steven Wilson to mix Heritage with him. The pair have been friends for well over ten years. “We’ve worked with different engineers but we never had anyone that we wanted their opinion on our music apart from Steven. The last album we did with him was Damnation. He was busy when we were doing Ghost Reveries and Watershed. He’s just one of those guys I completely trust musically. He’s been sort of a mentor to me in some way. I’ve learned a lot of stuff from him about production.”

The album artwork for Heritage looks exactly like how the album sounds – yet another deliberate decision. Åkerfeldt wanted to make a statement with packaging containing more colors and detail than pervious Opeth albums. Furthermore there is symbolic imagery present on the cover that directly correlates with the group’s past and present. It’s a detailed illustration one can contemplate for hours, like Iron Maiden’s Powerslave.

Longtime collaborator Travis Smith is responsible for the cover. He worked from a series of references provided by Åkerfeldt, including Flemish renaissance painter and printmaker Pieter Bruegel the Elder’s The Triumph of Death (recognized by metal heads from Black Sabbath’s Greatest Hits), the works of Hieronymus Bosch (such as the piece used by Deep Purple on their eponymous third album) and The Beatles Yellow Submarine.

At the center of the painting is a tree containing the heads of each member: Åkerfeldt, Martin Mendez (bass), Martin “Axe” Axenrot (drums) and Fredrik Åkesson (guitars). The head of Per Wiberg, who exited the band after recording his keyboard parts, is falling off of the tree into a pile of ex-members’ skulls. The tree’s base extends deep into an underworld populated by devilish figures, representing Opeth’s roots in death metal.

Nine stars dot the sky. Each represents a previous entry in the Opeth catalog. There’s the epic debut album, Orchid, which uniquely melded death metal, black metal, progressive rock and folk elements into breathtakingly long and mournful compositions. Next came Morningrise, which fanzine Lamentations of the Flame Princess heralded as “perfect.” The followup album, My Arms, Your Hearse, was called “a trip to heaven” by Metal Storm.

A concept album like its predecessor, Still Life marked even further progression. The Village Voice compared Opeth to King Crimson on Blackwater Park which CMJ called “a metal fusion of Pink Floyd and the Beatles.” The Dr. Jekyll and Mr. Hyde collaboration of Deliverance and Damnation, which fans know were conceived to be a double album, was followed Opeth’s totally captivating Roadrunner jewels, Ghost Reveries and Watershed.

“The sun in the sky symbolizes the new album, Heritage,” Åkerfeldt explains. In the background there’s a city on fire representing the decline of civilization with a line of people marching from it to nourish themselves with the artistic fruits of the band. “There’s a crowd of people in line to get to the tree. Everybody wants a piece of us.”

Opeth writes, records and creates albums for themselves first and foremost. But that isn’t to say that they aren’t gratified or inspired by those people grabbing fruit from their tree, because they are. “I’m not a complete attention whore in that I want us to have constant confirmation of how great we are all of the time,” Åkerfeldt says. “But over the years there’s been people who approach us who we can tell have been moved by our music or our lyrics. When someone comes up and tells you that they got married to one of your songs, that’s big if you know what I mean. I don’t need some kind of prize in the future saying what I’ve actually achieved in the music world. It doesn’t matter to me. But individual things that we’re being told by fans? That’s what matters the most.”

Luckily for those folks who are standing in that symbolic line depicted on the cover of Heritage, there’s no sign of stoppage for the band. “Opeth will be around as long as we feel that we can put out interesting music,” Åkerfeldt predicts. “The idea with Opeth is to do music we want to hear. So unless we can’t do that we’ll just quit.

“Every album could be the last of course,” he adds. “It’s not a threat, but we really want to honor that tradition of putting out records we want to hear. It feels like a little bit of rejuvenation with Heritage. We found a new sound we’d like to explore a little further. We just have to see where it takes us.”