WITHIN TEMPTATION have announced that they’ll be celebrating their 15th anniversary with a special concert at the Sportpaleis in Antwerp, […]

KISS, MASTODON, GOJIRA AND WITHIN TEMPTATION CONFIRMED FOR SONISPHERE FESTIVAL 2012…

WITHIN TEMPTATION have revealed a video clip giving fans the inside scoop on the band’s newest members, Stefan Helleblad and […]

WITHIN TEMPTATION TAKE HOME AWARDS IN THE 2011 LOUDWIRE MUSIC AWARDS…

MERRY CHRISTMAS FROM WITHIN TEMPTATION!

As we previously mentioned, this Festive Season we will be featuring a Christmas Message from some of our artists that […] 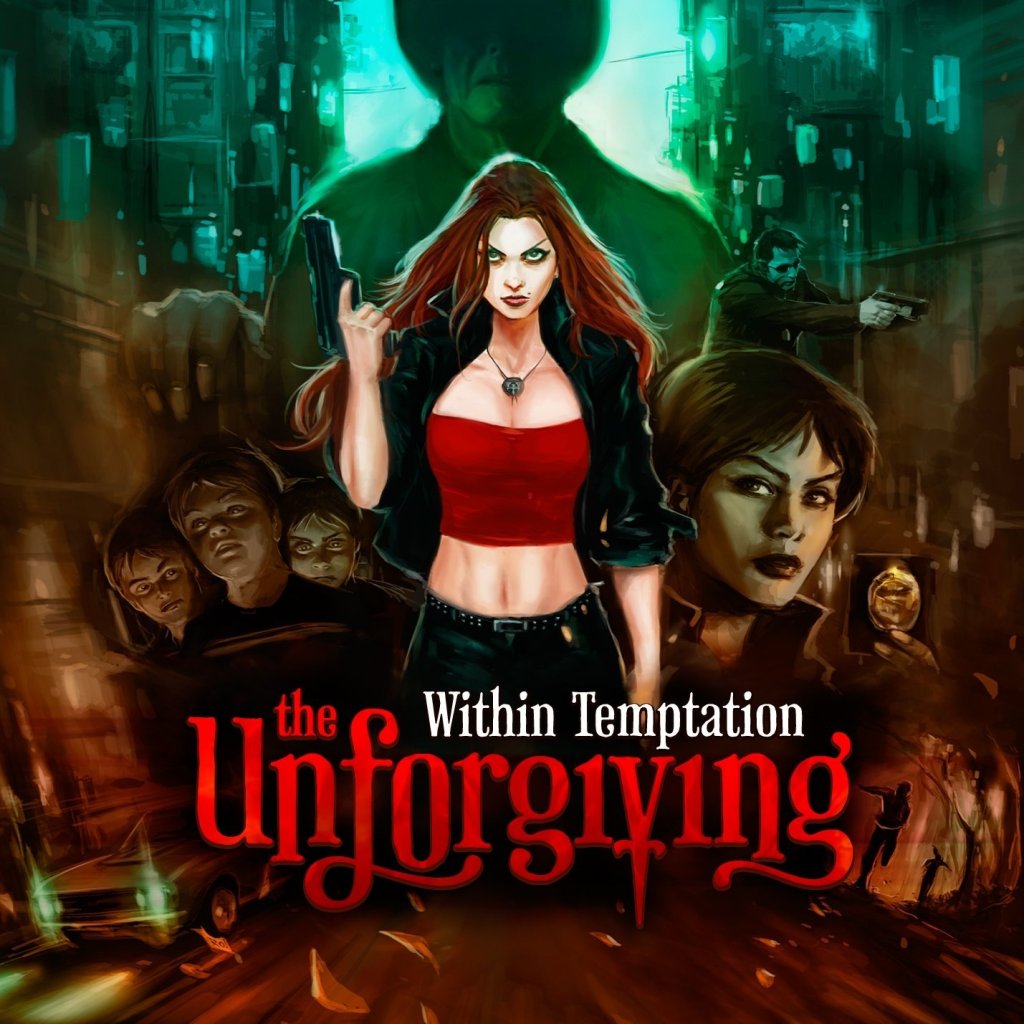 Masters of elegance, melodrama and symphonic grandeur, Within Temptation are not just one of the most distinctive and charismatic bands to emerge from the metal scene in recent times, but also one of European metal’s greatest success stories of the last decade. Formed in 1996 by guitarist Robert Westerholt and vocalist Sharon den Adel, ably assisted by bassist Jeroen van Veen, the Dutch quintet set out to create music that would strike a sublime balance between the bold, evocative sweep of cinema soundtracks and the brooding, gothic splendour of the finest dark-hued rock and metal of the modern age. A well-kept secret in the Netherlands for the first few years of their existence, the band exploded into the mainstream spotlight across Europe upon the release of their second album, Mother Earth, in 2000. Since then, they have gone from strength to strength selling in excess of 2.8 Million CDs & DVDs with releases in 48 countries, receiving 30 Gold and Platinum awards and 4 Export Awards of the Netherlands as well 2 MTV European Music Awards, 2 World Music Awards and many more.

Completed by lead guitarist Ruud Jolie and keyboard maestro Martijn Spierenburg (drummer Stephen van Haestregt departed in 2010), the current Within Temptation line-up has experienced huge commercial success in their native country and elsewhere, as albums like 2004’s The Silent Force and its sumptuous follow-up, 2007’s The Heart Of Everything, have mesmerised an ever-expanding fan base, setting new standards for symphonic rock and metal along the way. A formidable live band, whose extravagant shows have become legendary thanks to releases like 2008’s lavish Black Symphony DVD set, Within Temptation are now in an unassailable position as one of the continent’s biggest rock bands, but far from settling into complacency, this new year brings both a new sound and new perspective to the band’s unique world.

Their brand new album, The Unforgiving, marks a radical change in terms of both musical direction and imagery, as Westerholt explains… “Our first feeling was that we just couldn’t do the same things again,” he states. “What we’ve been doing for all these years is trying to create our own sound. On our last album, The Heart Of Everything, we achieved our goal. For us, it’s the perfect album in that style. So the mission was over and now we had to do something new and free ourselves from any rules. We wanted to do something fresh but what we also didn’t want to do was force ourselves to do something different that we didn’t feel. It had to be natural. As we started to write new songs we became liberated and started to think ‘Yes, this is where we are now and it feels good!’”

A dazzling tour-de-force of state-of-the-art hard rock, gleaming pop melodies, razor-sharp arrangements and powerful, shadow-shrouded atmospheres, The Unforgiving is quite unlike any previous Within Temptation album. Every one of its 12 tracks boasts a huge, instantly memorable melody, and yet there is enormous diversity and versatility on display here, as the band move skilfully from the instant thrills of the anthemic ‘Shot In The Dark’, the blissfully metallic ‘In The Middle Of The Night’ and the soaring menace of Faster (the first radio single) through to the epic bombast of ‘Iron’, the exhilarating drama of ‘Where Is The Edge’ and the irresistible disco thump of ‘Sinéad’. This is the sound of a great band on the form of their lives, as they explore every facet of their own sound and their own music collections, revelling in the multi-layered and consistently fascinating outcome.

“In a strange way, it also felt like we were getting back to our roots on this album,” notes Westerholt. We come from the late ‘80s and early ‘90s, that’s our musical birthplace. You always want to do something new, but we also went back to that time and embraced it. All these melodies and the feelings in the music of those times, bands like Sisters Of Mercy and Marillion, Europe and A-Ha, Depeche Mode and Metallica, those kinds of bands. That’s all inside of us, and that’s what came out when we wrote these songs.”

In keeping with their fresh musical outlook, Within Temptation have also moved purposefully away from the windswept fantasies of previous albums this time round. The Unforgiving is not just an album: it is also a comic book and a series of extended video clips that all form part of a dark and compelling tale of life, love, revenge, rage and regret. Based around a concept devised by American writer Stephen O’Connell (BloodRayne/Dark 48) and its graphic novelette manifestation illustrated by comic book artist Romano Molenaar (Witchblade/Darkness/X-Men), The Unforgiving comprises 12 songs, (each) focusing on the perspective of one of the story’s principal characters and their experiences.

“We didn’t want to make a traditional concept album where you just make up a story and write lyrics to tell the tale,” explains Westerholt. “What we’ve always done in the past when we read a book or saw a movie, is that it inspires us to write a lyric or a song, and that’s how we wanted to approach this. We have 12 tracks and they’re soundtracks to the story.” Although Westerholt and his band mates are eager to let fans discover the dark wonders of The Unforgiving for themselves, the guitarist offers this brief and enigmatic explanation of what the story itself is about. “People’s lives can go in different ways, depending on where they come from, who their family is and who or what crosses their path,” he says. “So this is a story about how in certain lives things go very wrong for people and some people get a second chance, after their death, to come to terms with what happened in life. On the surface it’s about bad guys hunting bad guys, but underneath the surface it’s more about the stories behind these people, their lives, what they are searching for and what’s life all about.”

In addition to the album and accompanying comic book, Within Temptation have also been working hard on another visual adaptation of The Unforgiving, resulting in three long-form promo videos for the songs ‘Faster’, ‘Shot In The Dark’ and ‘Sinéad’. All three begin with several minutes of dramatic narrative action before the band appears to perform the songs themselves, looking effortlessly stylish of course! “For me, a comic book is not childish, it’s like a movie to me,” says Westerholt. “By making these movies we can give the story a wider perspective and bring in the people who aren’t so interested in the comic. I’ve always loved comics but they’re not for everybody!”

Initial plans to tour immediately in support of The Unforgiving were, of course, shelved after the announcement that the band’s resident husband and wife team, Robert Westerholt and Sharon den Adel, are expecting their third child later in 2011. However, even though fans are now obliged to wait for a few extra months before seeing their favourite band in action once more, Westerholt insists that the benefits of this unexpected pause will far outweigh the disadvantages. Whatever happens, 2011 will belong to Within Temptation…

“We’re in a luxurious position now because we’ve finished the album, we’ve finished all of our videos and now we have months to really work on the tour and the show,” states the guitarist. “We really want to make this the most interesting and challenging show we’ve done. This album is so perfect for that, so we’re in a great position creatively. It’s worst for the people who bought tickets and now they have to wait for months, but I think we can do something even better now for them. It’s an exciting time!”