Joey Jordison’s latest project Scar The Martyr have this week revelead the brand new video for ‘Soul Disintegration’, which is […]

Scar The Martyr, the new project unveiled by Slipknot drum legend and songwriting mainstay Joey Jordison, have announced a UK […]

METAL MATTERS! FIND OUT ABOUT THIS AWSOME CAMPAIGN & HOW TO GET YOUR FREE CD SAMPLER FEATURING TRIVIUM, SCAR THE MARTYR, THE DEVIL WEARS PRADA & MORE!

Metal Matters brings together some of the world’s loudest rock, punk and metal labels to create one almighty heavy coalition […]

Joey Jordison of Slipknot & Scar The Martyr was recently interviewed by Stereoboard.com. Joey discusses his latest project, touring with […]

Slipknot drummer Joey Jordison recently spoke to DrumBrother about his latest project Scar The Martyr. He discusses his reasons for […] 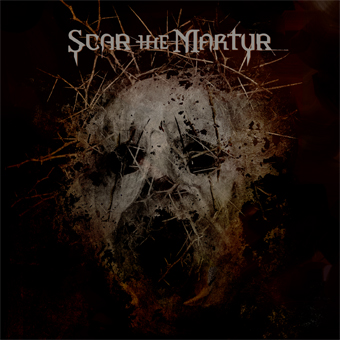 Heavy music has long provided a sanctuary for restless creative spirits. As drummer and songwriting mainstay for US metal titans Slipknot, Joey Jordison has earned himself a fearsome reputation as one of the most prolific and artistically driven figures in modern music. Now, after many years of side-projects and collaborations, he has formed a new band that boldly encapsulates his unique creative personality. A full-blooded and fully-formed sonic beast that brings Joey together with some of the most talented musicians in the rock world, Scar The Martyr are starting as they intend to continue: as an unstoppable force.
“I was working on new Slipknot material but I had to shelve it and wait until we all know we’re getting back together,” Joey explains. “But I couldn’t stop writing! I stayed in the studio because I had so many ideas and I decided to put another band together. I wanted to really challenge myself and come up with some material that worked on a more intellectual level and that wasn’t just a standard metal project. I had to do stuff that was challenging, something I’d never done before, and take it seriously. I needed to keep the integrity of Slipknot but branch out into some areas and I’ve never visited before and wanted to try. The result was way beyond what I expected. It was fun because it was a learning process. I was constantly challenged to make these songs better and take it in the different directions that I wanted to explore, and that’s what made this record so fun.”

Pieced together by Jordison and his new comrades over the last couple of years, Scar The Martyr’s debut album is both a celebration of one man’s unique vision and a potent collision between diverse but effortlessly compatible musicians. Although Joey plays guitars, bass and drums on the record, the contributions of lead guitarists Jed Simon (ex-Strapping Young Lad) and Kris Norris (Darkest Hour), vocalist Henry Derek and keyboard scientist Chris Vrenna (Nine Inch Nails) are not to be underestimated.

“I did the core of the music myself, but Henry did all the vocals and wrote all the lyrics, and Chris Vrenna from NIN did all the keys,” Joey states. “I had a bunch of vocalists in mind when I started this but I didn’t want someone from a known band and Henry blew everyone else away. Chris Vrenna was amazing too. He’s a visionary. It’s really hard to find great people to do programming and keyboard work and take the heaviness aspect and really transform it, so it’s more than just metal. I gave Chris total freedom and he did a perfect job. When he does keys it really adds to the actual song. It’s a very musical part of the compositions.”

“As far as the bulk of the songwriting, with all the extra flavours I wanted to bring in, I wanted to get not just friends but people who understood what I wanted to do,” Joey continues. “And they got it, man! Jed Simon came in and I didn’t have to tell him anything. I didn’t have to tell Kris Norris anything either. It was really weird. Me and Jed share the bond of a lot of 70s bands, and a lot of his style comes from that era. On Kris’ side, the influence comes more from the early metal stuff, which I love too. They helped out the songs so much. A lot of leads are just put in to break up a vocal and show off a guitar player, but you can sing these leads and I love that, plus they are great live players and songwriters.”

A dark, powerful and wildly inventive blend of punishing hard rock riffs, eerie keys and atmospherics, towering melodies and seething metallic aggression, Scar The Martyr represents a seamless blending of Joey’s influences into a warped but mesmerising whole. From the turbulent refrains and thunderous pulse of Soul Disintegration and Cruel Ocean to the driving, soulful thrust of Never Forgive Never Forget, My Retribution’s brooding riff attack and the slamming industrial crunch of Blood Host, it is a compelling maelstrom of smart ideas and massive hooks that recalls everything from Alice In Chains and Faith No More to Ministry and Neurosis while never once sounding remotely derivative. Mixed by legendary producer and sound sculptor Rhys Fulber (Fear Factory/Paradise Lost) Scar The Martyr is a mercurial meeting of minds, custom designed for maximum impact.

“When I listen to it, it doesn’t sound like anything,” says Joey. “That’s when I really know, regardless of what anyone else thinks, that I met my goal. The songs are fucking great. I’m happy with every aspect of the record and usually I’m not! That’s very new for me. It’s weird. I’m ultra-critical and I still am with this record, but with this one I took a lot of care over this. I made sure I got everything right. I committed to it. I think you can tell from the sound that it’s a real band. Even when some projects are good, you can tell they’re not real bands. But this is real.”

Despite being a member of one of the biggest metal bands on the planet while possessing a resume that includes stints with Korn, Satyricon, Ministry and Rob Zombie, not to mention two acclaimed albums with zombie punk crew Murderdolls, Joey Jordison still has more energy and ideas than virtually anyone else in heavy music today. Scar The Martyr is a brave and exhilarating bolt from the blue that promises to delight music fans from all points along the sonic spectrum. Once the album hits the streets, Joey and his new band will be hitting the road with full force, proving that not only is Scar The Martyr a bona fide band of brothers but also that this music is built to last and to leave us all with scars to cherish.

“If I’m going to do anything at this point in my career it’s got to be a proper band. It has to be, otherwise I’m wasting my time. I’ve had a blast with all the bands I’ve had the pleasure of working with. If I was going to step outside of Slipknot, I wanted to expose myself fully, all in, all out, no compromises, in a creative and soul spilling way. It would have to be full on, an exorcism of sorts, take no prisoners, no shortcuts, everything constructed to the fullest and the best it could be. Everyone involved with this album stepped up to the plate, and put their hearts and souls into this. I can’t wait for all of the fans to hear this and deliver this to them live. See you on tour!”