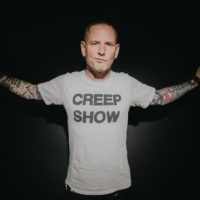 Brand new Creeper and Corey Taylor on the Radio Rock Show: Listen back!

Corey Taylor Tells The Story Behind The Title Of Hydrograd

Corey Taylor explains where the title for Stone Sour‘s new album ‘Hydrograd’ originated from over at Loudwire; “So my brain […]

Corey Taylor has got a lot to say, which is precisely why millions affectionately know him as “The Great Big Mouth.”

The Slipknot and Stone Sour frontman never minces words either on record or on stage, and that’s what’s solidified him as one of hard rock’s most important singers. Corey’s words have helped carry Slipknot and Stone Sour to multi-platinum status, solidifying both bands as veritable pop culture presences. From Slipknot’s Grammy-winning “Before I Forget” to radio hits such as Stone Sour’s “Through Glass”, his voice and lyrics continue to resonate with fans worldwide. However, he’s only begun to truly say what’s on his mind. Iowa stays in his heart. Born and raised in Des Moines, in many ways, Corey’s never left. He started Stone Sour at 19, and the band grew to become a local favorite. However, Sipknot soon came calling. Approached at his night job by the nine-man metal maelstrom, Corey joined Slipknot. Combining a cathartic, chaotic growl with an undeniable and unforgettable melodic sensibility, he created a sound that the world had never heard. Oscillating like a guillotine from guttural growls to infectiously invasive choruses, Corey instantly clicked with a generation on Slipknot’s now legendary 1999 self-titled debut. Songs like “(sic)” and “Surfacing” became anthems of disillusionment, while “Wait and Bleed” and “Purity” showed just how much range Corey has. The album swept hard rock by storm, quickly reaching platinum status and scaring the world into belief. Performing blistering sets on Tattoo the Earth 2000 and OZZfest 2001, Corey and Slipknot’s second record, Iowa, ripped through the Billboard Charts and reinforced the phenomenon.

For Corey, it’s about creating music that lasts and, of course, saying something. “Nobody is only one side,” he says. “Everybody is multi-faceted and multi-dimensional. I don’t want to be that cardboard cutout rock star. I never have, and I never will. I want to be the guy who wants to have it all. I want to be David Bowie. I want to be Trent Reznor. Those are the people I aspire to be. At the end of the day, I merely want to be a great songwriter who has no fear when it comes to creating. The older I’ve gotten, the better my writing’s gotten. I take more risks, and I say more than I’ve ever said in the past.”

In 2002, he got to show the world more than just Slipknot, resurrecting Stone Sour with the band’s self-titled debut. A worldwide tour followed and “Bother” became a bona fide crossover hit appearing on the Spiderman soundtrack and lighting up radio charts. The album brought listeners closer to Corey. “Stone Sour was there before Slipknot,” he continues. “I got a chance to really show another side of myself with songs like ‘Bother.’ I wrote that on an acoustic guitar years before, and I never lost sight of those roots.”

The nine-headed metallic hydra returned with its most critically acclaimed album, the Rick Rubin-produced Vol. 3: The Subliminal Verses. The record’s third single, “Before I Forget” led to Slipknot’s first Grammy. Then came Stone Sour’s sophomore album, Come What(ever) May in 2006. The world got to experience just how diverse of a songwriter Corey was on the likes of radio hits, “Through Glass” and “Sillyworld.” His lyrics went deeper than ever, covering everything from relationship struggles to political disarray in poetic fashion. He explains, “The older you get, the more you feel like you understand yourself—you know your limits, you know your boundaries and you know how far you can take it. The darkness comes when you realize there are so many lines you can cross. That’s really what it comes down to. The more you know yourself, the more you can go there. I think that’s why it’s gotten easier for me to do that.”

It became even easier for Corey to be honest on Slipknot’s fourth masterpiece, All Hope Is Gone in 2008. The record debuted at number 1 on the Billboard Top 200. The band launched a worldwide tour that saw them headline Europe’s most revered festival, Download, play Madison Square Garden and end on Halloween with Fangoria and Sipknot’s partnership, “Trinity of Terrors.” All Hope is Gone is a landmark record for the singer. Fourth single, “Snuff,” was Slipknot’s fastest top five debut, and the music video paired Taylor with legendary A Clockwork Orange star Malcolm McDowell, bridging the gap between Taylor’s love of classic films and music. Plus, the Fangoria connection brought things full circle for the lifetime horror fan. “I’m such a horror geek, comic geek and action figure geek. I’m inspired by so much—from Hunter S. Thompson and Quentin Tarantino to The Dark Knight and Halloween. Just show me something that doesn’t suck, and I’m happy,” he laughs.

He once again ventured into new territory with Stone Sour’s third offering, Audio Secrecy, when it hit shelves in September 2010.Propelled by hit single “Say You’ll Haunt Me,” Audio Secrecy saw Corey open up like never before. In addition, he’s jammed live with everyone from Korn and Slash to Alice in Chains and Travis Barker. It’s all been a part of the Corey Taylor legacy, which continues to grow as he works on solo music and Stone Sour. He concludes, “If I choke myself off, I’m not going to be able to live and breathe this. I can’t just be the angry guy in Slipknot or the dark guy in Stone Sour. People have to hear the other music as well because it’s a big part of the story.”

They will, and they won’t forget it. Corey’s also prepping his literary debut, Seven Deadly Sins, a personal, poignant, and twisted take on what it means to sin. “I’d been threatening to write a book for a long time, and I just went for it,” he declares. “I think people are going to be really surprised, but I wouldn’t have it any other way.” The book, due out July 2011 via Da Capo Press, effectively guts the idea of “Sin”. In this insightful often hilarious tome, Corey dissects why classic “transgressions” aren’t really sins at all but human characteristics. He calls for a dogmatic restructuring, showing us what the real sins are in the process. His prose moves at light speed, debunking myths and proposing another way of thought with a philosophical sensitivity and a razor sharp wit.

The book, due out July 2011 via Da Capo Press, effectively guts the idea of “Sin”. In this insightful often hilarious tome, Corey dissects why classic “transgressions” aren’t really sins at all but human characteristics. He calls for a dogmatic restructuring, showing us what the real sins are in the process. His prose moves at light speed, debunking myths and proposing another way of thought with a philosophical sensitivity and a razor sharp wit.

The book is just another piece of the Corey Taylor enigma. He sat behind the board, producing Walls of Jericho’s 2008 EP, Redemption, and he’s written with both Halestorm and Rev Theory. He even hosted the 2009 and 2010 Kerrang Awards alongside Anthrax’s Scott Ian. His interests also continue to stretch far beyond music. “I’ve been a Colts diehard since I was a kid, and I’ll also never stop watching WWE wrestling,” he laughs. “I also can’t stop devouring history books—whether they’re about WWII or the Italian Renaissance, everything is an influence. You have to take from every source that you can. It’s the only way to really make relevant and real art.”

Corey leaves off, “I came from Des Moines, and I get to live a dream that I never would’ve imagined. As an artist, a friend, a father and a songwriter, I’ll never stop challenging myself. You can be whatever you want. I’m living proof. Just the fact that I have a career should tell you that anything is possible.”